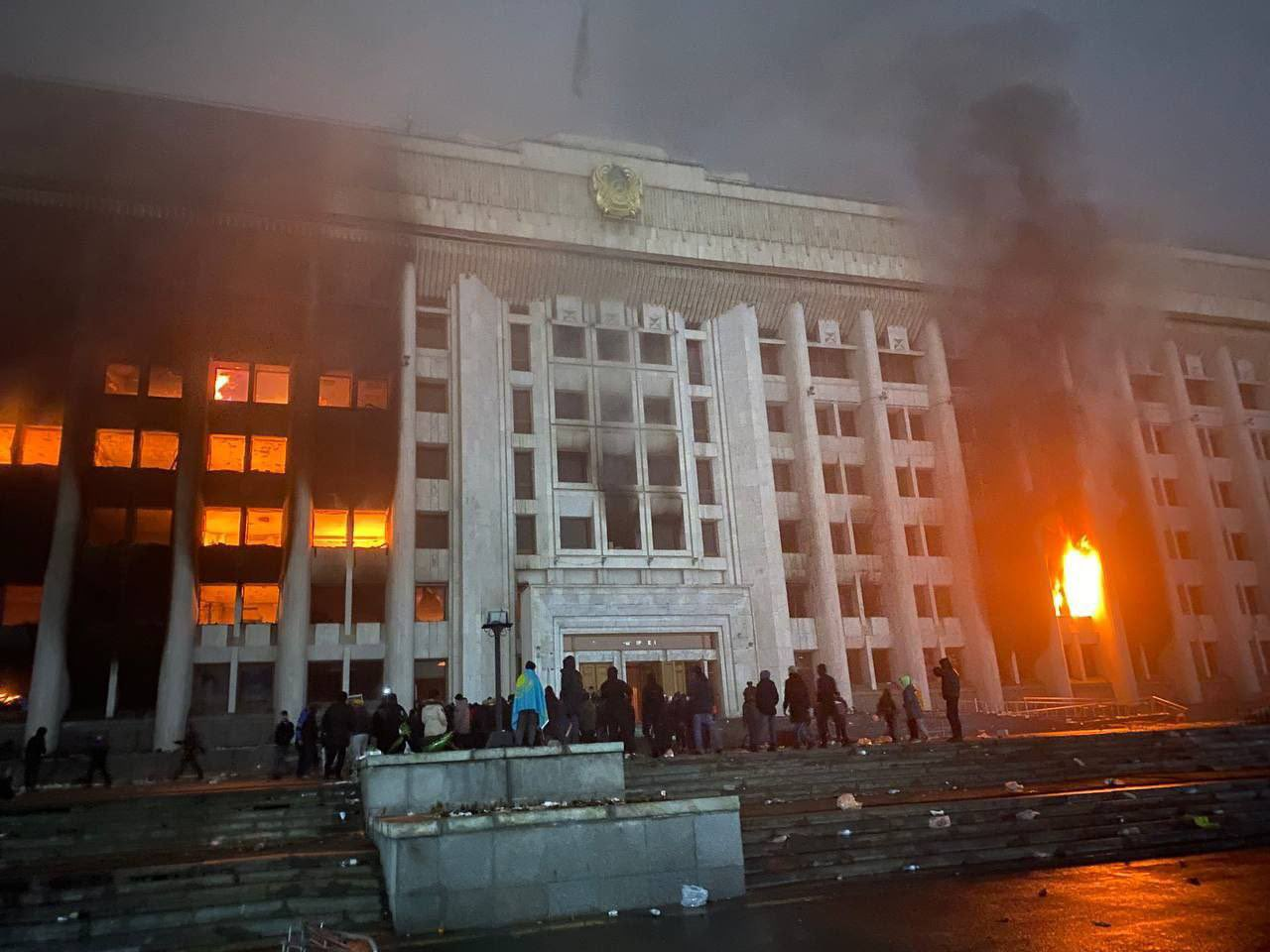 Evacuation sirens are ringing out over the city of Almaty, nestled in the foothills of the Ile-Alatau National Park. On the other side of the mountains lies Kyrgyzstan, another post-Soviet State. To the West is Bishkek, the Kyrgyz capital. To the East lies Xinjiang, China.

As the armored cars roll in and gunshots continue ringing out across the city, one wonders what might be left by sunrise. The flicker of burning cars and buildings illuminates scenes of street barricades, armed robberies, looting, and what appears to be the emergence of heavily armed groups claiming to be civilians. A white Lexus pulls up, and hooded men begin passing out rifles before disappearing back into the smoke and chaos.

President Tokayev has taken control of the Security Council, declared a state of emergency, that the Republic is under attack from outside forces, and called for Russian and Belarusian forces to intervene. Reports have been issued that Special Forces operations are being carried out around the country; an airport seized earlier in the day is said to have been “cleansed” in under half an hour. As they roll into Almaty, the crowds begin to scatter.

These are the images and reports coming from Kazakhstan this evening; scenes of destruction, havoc, and a heavy and swift government response. As liberal outlets and commentators inevitably prepare to decry the “authoritarian” response of the Kazakh and Russian governments, onlookers would do well to dig a little deeper than the narratives we shall soon see emblazoned across headlines of such “impartial” arbiters of truth.

What’s really going on? That’s the big question, and as always, the answer is not as simple as we would like.

Kazakhstan, officially The Republic of Kazakhstan, was formed in the wake of the Soviet collapse in 1991. As with all such post-Soviet states, its politics is rife with corruption, reaction, and the dictatorship of capital. As a member of the International Meeting of Communist and Workers Parties (IMCWP), our Party has two fraternal Parties in Kazakhstan: the Communist Party of Kazakhstan (QKP), and the Socialist Movement of Kazakhstan (KFOR). Both have been outlawed by the current government.

So then shouldn’t our position be one of support for the protesters assaulting the bourgeois government? Unfortunately it’s not that simple.

As early as December of 2021 it was clear that hard times were coming. As the crises of capital continued to be exacerbated and the bourgeois government continued to fail in its duty to care for the people (as all bourgeois governments do), competing forces began to spring forward. Our own fraternal Comrades were, and continue to be, vocal supporters of the strike movements, specifically in the Mangystau region in the west.

One key element of this situation is the Kazakh government’s fuel subsidies. For years now bourgeois economists have called for an end to the subsidies, as they are apt to do any time a policy benefits the people of a country rather than just corporate interests. Kazakhstan is a resource-rich nation, the top global producer of uranium, a top-10 producer of chromium, gold, and titanium; and a top-20 producer of oil. It is also one of the top producers of natural gas. In this way we see that Kazakhstan is by no means a poor nation, and by no means should be viewed as incapable of caring for its people. However, as 2022 dawned the fuel subsidies were axed, and as prices went up for honest working people, outrage quickly followed.

In response to the popular will being exercised so clearly against this decision, the government changed course. What is typically left out here is that the government’s initial move to end the subsidies was directly due to pressure from the World Bank and UNDP; continuing neoliberal policies under the guise of environmentalism. This phenomenon, known as “Green Imperialism,” is well noted.

Likewise, as the popular backlash took center stage, both progressive and reactionary forces moved in. Western liberal outlets are very eager to highlight the violence, and to package it with the popular movement that has taken shape in Kazakhstan led by progressive forces. They simultaneously downplay the fact that the crisis was itself the result of Western liberal policies, and the subsequent sacking of officials responsible. They likewise downplay, or completely overlook, the other factors at play.

It is well known that Kazakhstan is a very important player in several key geopolitical formations. It is a member of the CIS and CSTO; it is also a key supporter of China’s Belt and Road Initiative. In clearest terms, it is a key strategic ally to both China and Russia. So, naturally, a destabilized Kazakhstan would be a big win for imperialist forces, such as those dumping over $777 billion into “defense,” with the stated priority of stopping the rise of Socialist China. Geographically speaking, with the failures of imperialist expeditions in Afghanistan and attempts to manufacture a narrative of genocide in Xinjiang, Kazakhstan is the natural next target. To compromise Kazakhstan would mean to paralyze the entirety of central Asia, and create a “soft underbelly” in the midst of the emerging alliance of China, Russia, and Iran.

Reports surrounding the situation in Kazakhstan now contain indicators that will come as no surprise to those who have been following the development of “color revolutions,” which came to prominence as an imperialist tactic with Ukraine’s Maidan revolution of 2014, which saw the country split almost completely down the middle between western-backed liberal and neo-Nazi forces, and those supporting the Russian Federation and a return of Communism.

The U.S. State Department is, at the very least, well aware of the situation and which forces are active on the ground, as indicated by its warning from the embassy of demonstrations being put on in December by another outlawed political faction: Democratic Choice of Kazakhstan (QDT). No such announcements were made regarding the actions being undertaken by other forces on the ground.

As is standard practice at this point in attempted color revolutions, the QDT are suspected of receiving direct and indirect support from the United States, as indicated by the above, as well as through more difficult-to-trace back channels such as the National Endowment for Democracy, a well known conduit for US foreign imperialism, which has been pumping money into Kazakhstan. It is worth noting here that, as far as Kazakh politics goes, the QDT stands as the most likely favorite for US imperialist interests. Founded and led by overt capitalists, such as current leader, billionaire, and alleged embezzler Mukhtar Ablyazov, their political platform reads like a CIA wish list: neoliberalism, populist nationalism, and anti-China militancy.

Confirmation or refutation regarding the involvement of the QDT or any other organized group in the current crisis is yet to appear, but we see here clear parallels to the actions surrounding the failed color revolutions in Belarus, Hong Kong, and elsewhere over the past several years.

Our position on these matters is clear: US imperialist interests OUT!